“Longshot” Becomes A Rookie of Madden 18

The Madden franchise never fails to feel both familiar and fresh, Like a well-worn set of cleats with new laces. Similar to “Madden NFL 18 – longshot”, which tasks single players with fulfilling a former University of Texas football quarterback’s dreams of being drafted by an NFL team. 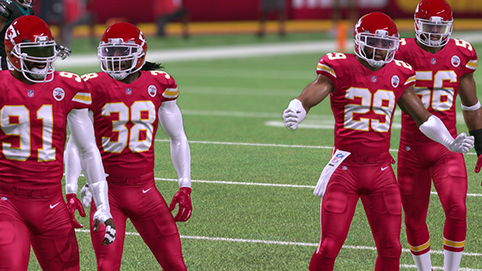 But Electronic Arts’ take on the mode is decidedly more cinematic, “Longshot” will feel immediately familiar to anyone who has played MyCareer in 2K Sports’ “NBA 2K” series, with three distinct acts and an excellent cast of actors, , including Oscar-winner Mahershala Ali, a clear character arc for protagonist Devin Wade.

A warm and fuzzy flashback kicks things off, with a young Wade (J.R. Lemon), his best friend Colt Cruise (Scott Porter) and Wade’s father, Cutter, (Ali) slinging a pigskin around the front yard of their humble home in Mathis, Texas, an actual suburb of Corpus Christi. All of that adds up to an engaging experience that Madden newcomers and veterans alike should enjoy.

The fun, however, is cut short by a storm, which also serves as foreshadowing for trouble to come, including Cutter’s untimely death and Wade’s subsequent exit from college football.

Wade is seeking redemption as he and Cruise travel to Indianapolis for a combine, Sixteen years after that childhood scene, an event for undrafted players — so-called longshots — to showcase their skills to prospective teams.

what else, “Longshot.” Like the regional combine, it’s a possible if unlikely path to the NFL, but one that will put him squarely under the microscope. There, Wade is approached by a smarmy television producer (Ricky Wayne) to star in a new reality show called,

The drama that unfolds over the next couple of hours is punctuated by powerful performances from the cast, including Rus Blackwell, who plays fictional former NFL coach John Ford. Like Wade, the no-nonsense Ford also is looking to exorcise his personal demons.

Gameplay is cleverly weaved into the story, ranging from Wade honing his passing skills under Ford’s tutelage to choosing how he responds to probing questions from the media. The better the player performs, the better Wade’s chances are of being drafted.

That being said, there is more than one ending, which lends replayability to the relatively short experience, though not much.

“Longshot” isn’t fumble-free. For instance, while the overall game includes a mode for newcomers to learn the ropes, there’s a missed opportunity to teach them within the confines of “Longshot,” which, if nothing else, is intended to expand the Madden fanbase.

Another quibble: Wade’s character is defined by the decisions he makes, which in turn determine his draft score. But the choices he faces are relatively tame — to wit, does he stop to take a picture in front of the regional combine sign and risk running late to a hotel check-in?

Here, it would have been refreshing to see the mode tackle thornier NFL-specific issues like erstwhile former San Francisco 49ers quarterback Colin Kaepernick’s decision to kneel during the national anthem.

Overall, though, “Longshot” is a welcome addition to the Madden franchise and well worth your time.

Also new this year is three vs. three online team play in Madden Ultimate Team, a mode that allows players to collect and assemble a lineup of gridiron greats, past and present. Other refinements include new play styles (arcade, simulation and competitive) and difficulty levels (rookie, pro and all-pro); customizable AI; and target passing, which gives players more control over where the ball is thrown on the field.